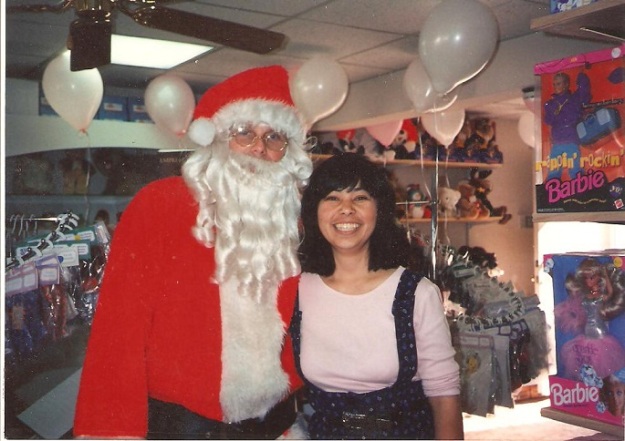 Santa Hubby and me (Maria Cisneros Toth) at our doll shop in Running Springs.

It was the day after Thanksgiving of ’92 and I had a doll, teddy bear & collectible store called the, Itty Bitty Doll Shop, in Running Springs, a small community nestled between Lake Arrowhead and Big Bear.

Winter had arrived in time for the holidays and snow blanketed the mountains. Local businesses were gearing up for the tourists who would stop in town before trekking further up the hill.

Santa with our goddaughter, Kayla.

To help bring customers into our store hubby reluctantly agreed to play Santa Claus. Before he had a chance to have a change of heart, I rented the red suit. We were optimistic and bought plenty of toys to fill Santa’s sack.

With so many tourists driving through town to reach the ski resorts and sledding areas, hubby playing Santa Claus seemed like the perfect marketing strategy. The Santa plan: he’d stand at the edge of our parking lot and wave people toward our store. A sure winner!

Santa handing our goddaughter, Megan, a coconut. Yes, a coconut! Why? Because my hubby is also a nut!

Only thing was it turned out to be one of the most coldest and iciest days in years and our parking lot literally turned into a slippery ice skating rink!

Then it started to snow, and snow and the fog rolled in. And it became much too cold for anyone to want to stop and get out of the warmth and comfort of their cars.

Long story short, hubby became a drive-thru Santa. From our store window, I watched as a long line of cars inched along as families waited to see Santa Claus. Santa handed out toys and candy from his big, red sack. Hubby recalls lots of pictures being taken as children shared their Christmas wish list with him through rolled down car windows. I can only imagine the kids must have thought they had arrived at the North Pole! 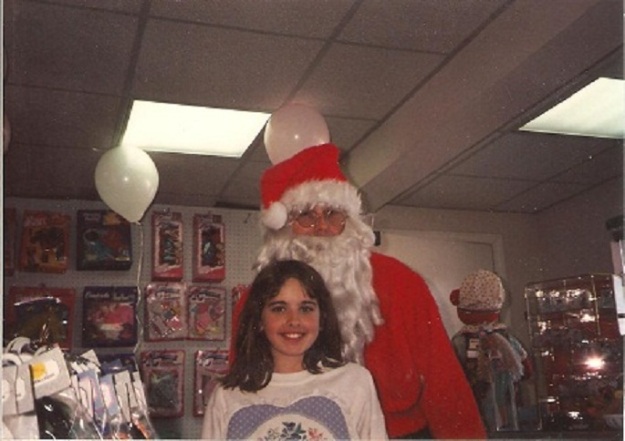 Santa with my friend’s daughter, Heather.

By evening, the Santa traffic had dwindled, so hubby rushed into the store for a handful of candy canes. Then I couldn’t help but smile as I watched him bolt toward the real estate office to deliver the candy stash to the agents. As he ran across Hilltop Blvd., it was almost as though I could hear him shout in a Jimmy Stewart, It’s a Wonderful Life sort of way, “Merry Chrishmas, Running Springs!”

The moment is etched in my heart forever.

Santa with my friend’s daughter, Melissa.

So, on that very snowy and icy day, my hubby who is for the most part a reserved and quiet man had really become Santa Claus. Aside from one of my best friends and her daughters who stopped by early for photos, we didn’t make a single sale. In fact, we took a financial loss. But it was all worth it just to watch hubby put on the red suit and white beard and knowing he created a sleigh full of happy memories for children visiting our snowy community.

It’s round two for this fun-loving Santa!

And it wouldn’t be the last time he’d wear the red suit either. A few years ago, I worked at an afterschool program for at risk youth. And once again, hubby handed out toys at our Christmas party to children of all ages who anxiously waited in line for a chance to talk to Santa Claus.

Even some of the grown-ups became believers!

It was so sweet the way he took his time with each child, listening to each of their special Christmas wishes. I was told by our site coordinator that for some of the children this would be the only Christmas they would have.

Santa takes his time, listening to each child.

Gosh, how did I get so lucky to marry Santa Claus?!

Have you or someone you know ever dressed up as Santa Claus? Do you have a special Santa memory you’d like to share?

Writing Stories on the Hearts of Children

Adventures that burn on in the heart.

Child's Own Studio
The Reader's Guide to Epublishing

Your destination site for the Best in Ereading

reviews, raves and a random assortment of book buzz

Writing on the sidewalk

A writer-mom's life is filled with a million and two distractions; sometimes she finds herself at the park, WRITING ON THE SIDEWALK

A Writer's Life of Scraps & Scribbles

The latest news on WordPress.com and the WordPress community.